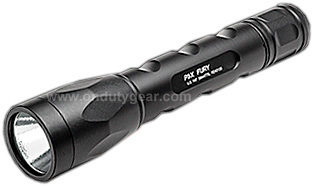 Surefire has announced their flashlight and weaponlight lineup for the 2013 SHOT Show and it has some incredible lights.  The list includes a 4000 lumen rechargeable flashlight, IR versions of the X300 and X400 and weaponlight version of the P2X Fury and a new 800 lumen P3X Fury.  Just don’t get too excited yet though, as many of the flashlights they announced at the 2012 SHOT Show still haven’t shipped yet.

Yes, you read that right.  The Surefire Annihilator comes in at 4000 lumens.  It will feature a rechargeable system with variable output to save on the battery draw when the blinding light is not needed.

A redesign of the E2D Defender, this Ultra version increases the lumens from 200 up to 500 with dual output.

One of our best selling flashlights of 2012 was the Surefire P2X Fury.  Building on the success of the 600 lumen P2X Fury, the P3X Fury boasts 800 lumens!  This should be a great flashlight. Now here is a great idea.  Take one of the best flashlights of 2012 and turn it into a weaponlight.  600 lumens and it can still be removed and used as a handheld model.

Just like the P2X Fury version, but featuring their new P3X Fury at 800 lumens!

Completely redesigned, the BSF Shotgun Forend features an ultra-high, dual output mode LED that can hit up to 500 lumens.

Building upon their X300, this weaponlight will feature a white light or IR light mode.

Featuring a 150 lumen white light and a IR laser sight, the Surefire X400V-IR has a lot going for it.  This could be why the X400-IR from the 2012 SHOT Show was never released.